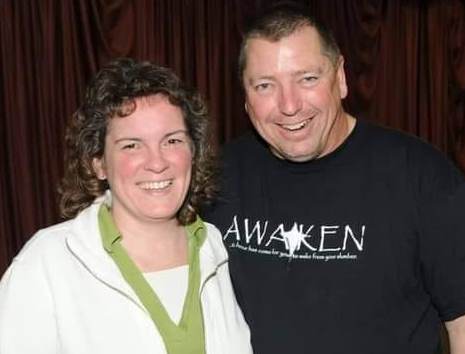 If you called or visited TV-44 in the past 9 years, or volunteered at the TV-44 auction, you very likely spent time with Michele Brockert.

Wife, daughter, sister, and mother of 3, Michele Brockert came to TV-44 nearly a decade ago in a small role assisting with the auction.  That year, we knew she was the right person to add into our ministry staff. She became the co-coordinator of the annual fundraising auction, as well as the front office manager. Michele assisted every employee on projects, provided in-house catering for station events, and rolled up her sleeves and painted walls during renovation projects. That’s actually only a small picture of everything Michele did at TV-44. With her heart sold out for Jesus and her willingness to serve, Michele Brockert embodied the mission of  TV-44.

It was heartbreaking to hear the news that in the early morning hours of January 13, around 1:30am, the driver of a car fell asleep and crashed into the Brockerts’ home, taking the lives of Michele and her husband, Jon. We didn’t only lose a co-worker. We lost a friend who was a true member of the TV-44 ministry family.

Perhaps you were one of the many who prayed with Michele on the phone. She lived her life studying the Bible and applying it to her own life.         Michele’s husband Jon, a U.S. Postal Worker, as well as a Christian musician, also spared no moment to jump into an opportunity to encourage someone in the name of Jesus.

Jon and Michele were a “no-nonsense” couple. They didn’t do things for their own personal acclaim. They served on mission trips, participated in faith based building projects. Jon played keyboard, guitar, and sang in many churches. Michele volunteered with Heartbeat of Lima and served on the board of UnReined Ministries.

“Chel and Jon never went to the way of what man,”thought”. They read and prayed….then only…believed and lived according to The Living Word of God, unashamed. “ said Janelle Taviano. UnReined Ministry Founder.

“They were always there to serve  Jesus in any way they could.” said Pastor Neal Whitney, of The Church at Allentown.

Mark Burd, Chairman of Revive Ohio, echoed Neal’s thoughts. “Jon and Michele Brockert weren’t casual or part-time Christians by any means. These folks were completely devoted to Jesus Christ, and to sharing His grace and love every waking moment of their lives, with everyone they came in contact with. It was so genuine because that’s simply who they were! Whether you were a family, close friend, co-worker, or a complete stranger, if you met them, you were treated with grace, love, and respect! They treated everyone the same, just like their Lord Jesus did, and everyone that met them will tell you the same story. Simply put, they lived their lives everyday to glorify God!!”

Who can comprehend how those whom God takes so early are chosen? Does not the early death of young Christians always appear to us as if God were plundering his own best instruments in a time in which they are most needed? Yes the Lord makes no mistakes. Might God need our brothers for some hidden service on behalf in the heavenly world? We should put an end to our human thoughts, which always wish to know more than they can, and cling to that which is certain. Whomever God calls home is someone God has loved. “For their souls were pleasing to the Lord, therefore he took them quickly from the midst of wickedness.” (Wisdom of Solomon 4)

Please keep Jon and Michele’s 3 children, Aaron, David, and Kristina, in your prayers, as well as  Michele’s parents and Jon’s mother.  We will forever be grateful for Michele Brockert’s impact at TV-44.

Jennifer Beck - June 10, 2019 1
As TV-44 celebrates it's 37th anniversary of broadcasting the message of Jesus Christ, take some time to reflect on the words of late station...
X