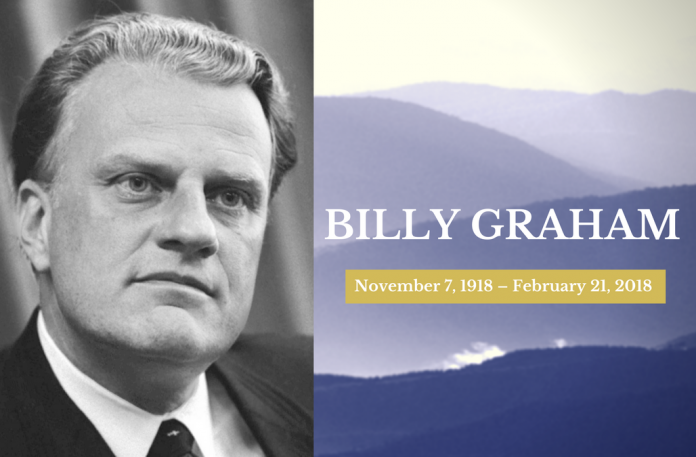 You are invited to watch a live broadcast of the memorial coverage on TV 44 starting at 11:00am.

The Billy Graham Memorial service will also be rebroadcast on TV 44 Saturday at 7:30 pm and Sunday at 3 pm

He was known as “America’s Pastor” and respected by millions for the love of Jesus that he gave to all. As I watched the livestream of his public visitation at the US Capitol Rotunda, I can’t help but have tears in my eyes for the thousands who have come to honor him and the millions that were impacted by his good work. It makes me reflect on how important the gift of life is and the free-will we have to decide how we use it. Billy Graham recognized this gift and made use of every moment to invite people into a relationship with Jesus. He understood God’s desire for all people to know Him as Lord and Savior and truly had a heart to serve his Heavenly Father above all else.

Billy Graham was born in 1918 in Charlotte, North Carolina who became internationally well known in the late 1940s for his large indoor and outdoor rallies with sermons that were broadcast on radio and television for six decades. He had a strong message of the Gospel that provided spiritual counsel for so many, including the Presidents of the United States for over 50 years.

It is said by his staff that more than 3.2 million people have responded to the invitation at Billy Graham Crusades to “accept Jesus Christ as their personal savior”. Graham preached the gospel to more people in person than anyone in the history of Christianity with an estimated reach of 2.5 billion people worldwide.

According to billygraham.org, “This Friday, March 2, 2018, Billy Graham’s private funeral service will be held at the Billy Graham Library in Charlotte, North Carolina. About 2,300 invited guests are expected to attend. Following the service, Mr. Graham will be buried beside his late wife, Ruth, whose grave is at the foot of the cross-shaped brick walkway in the Library’s Prayer Garden.”

As a reminder, viewers can watch the live broadcast of Reverend Graham’s memorial coverage on TV 44 starting at 11:00am, March 2nd.

There will also be a live stream from Billy Graham’s website you can watch online HERE.

While we mourn the earthly loss of a wonderful man of God, we rejoice in knowing he is home with Jesus, his Lord and Savior. The legacy he leaves behind inspires so many of us to serve with our life in the same way Billy did. I’ll end with a quote Billy Graham so eloquently said: “God has given us two hands, One to receive with and the other to give with.” Billy Graham gave well.

Would you join us in praying for the family and friends of Billy Graham? May they feel Jesus’ peace and comfort in the coming days.

Did God Use Billy Graham to Impact Your Life? Share Your Story with us in the comments below!

Tom Burtch & the Rockford Carry Out

Ashley Stuart - January 3, 2018
0
Passion exists to glorify God by uniting students in worship, prayer and justice for spiritual awakening in this generation. From its start in 1995, the...
X