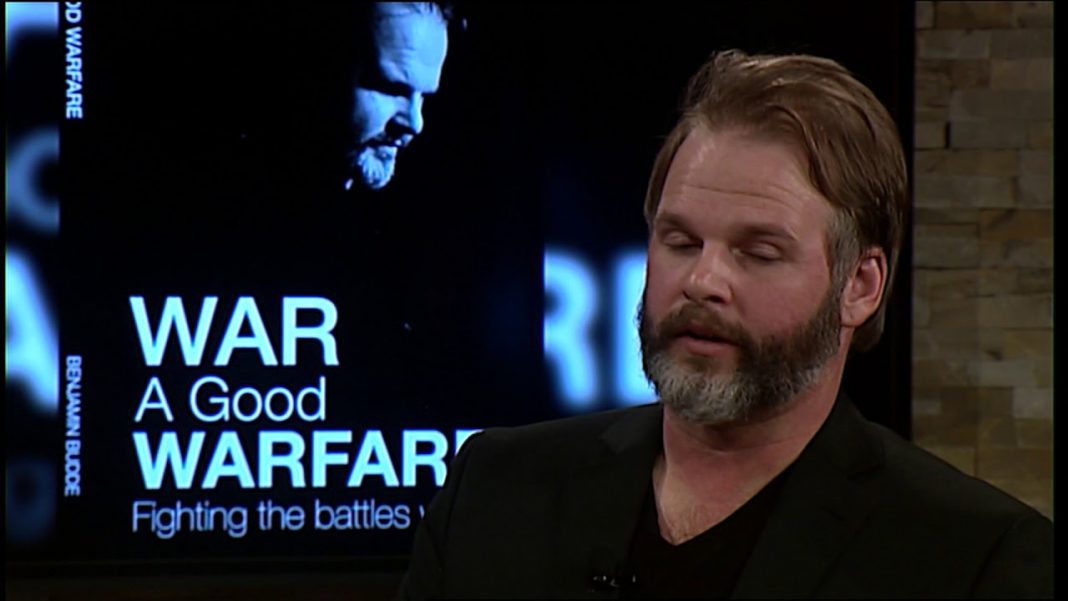 Facebook
Twitter
Pinterest
Linkedin
This is a five-part series on the testimony of author Benjamin Budde. His book, War a Good Warfare is available now at Amazon.com, or by contacting Benjamin directly: ben.budde@yahoo.com / 419-733-8689. Benjamin is willing to share his complete testimony for your organization. He is currently booking speaking engagements.

The youngest of 8 children, Benjamin Budde spent many years simply trying to find his place in the world. As his older siblings claimed their talent territory, Benjamin sought for something he could call his own. He found it in the form of music.

As a teenager, music became not just his identity, but an extension of his emotions and thoughts. “I started out playing in church”, Benjamin said. “Which was good, but in reality, I was listening to and hanging around groups that didn’t follow the best lifestyle.”

Drinking and drugs were not uncommon parts of the music scene and it wasn’t long until Benjamin found himself being drawn into those elements as well.

“Then, my mom died.” Benjamin quietly remembered. “And that was the hardest thing in my life.”

Benjamin’s mom was not just his mom. As a homeschooled student, she was also his teacher. In losing her, he felt so much was taking from him. “I was so angry with God,” Benjamin said. And at that point, he turned his back on his childhood religious experiences and went his own way. 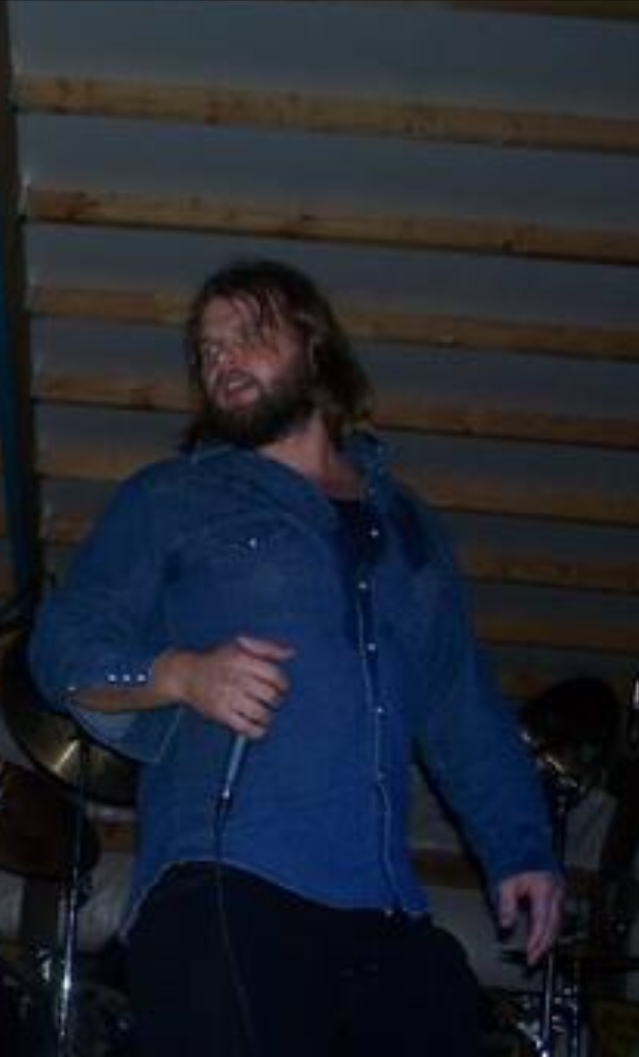 For 10 years, Benjamin tried to life life by his own book: booze, drugs, and rock and roll. Benjamin lived a partying music scene, all the while, finding relative success in his musical ventures. “I finally got an opportunity to open for someone that I had always looked up to in the music world,” he said. “I mean, this is a guy that movies are made about. He really was making it in the music world, but the day I met him, I was really surprised. I met someone who seemed lost and not happy. I found myself wondering, how could this guy not be happy when he obviously has it all?”

Meanwhile, Benjamin certainly did not have it all. “Just a few months after that music opportunity, I lost almost everything.” He had his house, but he didn’t have furniture, other than a couch that would double as a bed. Friends would drop him off at night and he would “roll in” to the house and pass out from being drunk or high. And that was a point where Benjamin started quietly wondering- what did it really mean to have it all and what was missing from his life?

Benjamin found a Bible in his house. It had been his mother’s Bible. Feeling like he didn’t know where to next turn, he started reading…and in a matter of days his life miraculously changed.

It took a lot for Benjamin Budde to be willing to open that Bible. But Benjamin had been through a lot at this point, and something inside of him was letting him know, his current lifestyle would only lead him further downward.

Losing his mother had been hard enough, but he still had her Bible, something that had always been important to her. So he opened it, and he started reading.

In 3 days time, Benjamin was starting to see everything differently, and he wanted to make his life right with God. He started confessing for the things he had done in his life, things he had done to his family, to his friends, to himself, even to strangers. This went on for several days, as Benjamin felt an increasing desire to find wholeness in Jesus. After so many years of living life for himself and getting nowhere, Benjamin was ready for something new to fill the holes in his life, and that Something turned out to be a relationship like nothing he’d ever experienced before.

So Benjamin embarked in starting an ongoing conversation with his Savior, and He discovered a nourishment in his life that had been missing for so long.

“What is prayer?” Benjamin found himself asking, and he realized it meant a relationship with Jesus. As Benjamin pondered more and more on what a relationship with Jesus would look like, he started exploring the ability to simply talk to Jesus, just like he would talk with a family member or friend. “We can ask God anything, even advice on what to buy at the story. God really wants to be there for us, like that.”

Part 3: Give Me The Hardest Drugs You’ve Got

“In my mind, God did ‘this’, my mom was gone; I was out of the band, I’d lost all my stuff. I found myself wonder, who cares? Give me the hardest drugs you’ve got. I’ll take them. I don’t care about my life.”

That was Benjamin Budde as he found himself at the lowest of lows. After living years for himself, making choices that he thought were the keys to happiness, and watching his mother pass away, Benjamin Budde realized he could not live his life by his own choices anymore. As he found his situation spiraling more and more downward, Benjamin had a choice: continue riding that downward path, or find courage to look up — way up to the One his mom had always said was the true way. And he chose up.

It’s a day he will never forget, because it’s a decision that changed his life, in ways he could never predict. “The old man’s dead and gone, and in Him we are a new creation.” Benjamin said, thinking back to the dramatic changes that happened. As he continued to read his mother’s Bible, and invest more time in seeking a relationship with Jesus, he felt light begin to invade his life.

“That’s literally what it felt like,” Benjamin said. “The old man was dead and gone. God touched me and changed my life. It is amazing how He does what He does. Even my eating habits changed.”

“I didn’t even know what I was running away from. That’s the thing about sin. It was blinding me so much. I didn’t even realize I was upset at God for what happened. I partied so much through those years, I was literally just lost. But God brought me back, and as He says, “I will bring Light into your darkness.”

As Benjamin started to experience the inner freedom that came with that light over the darkness, he just wanted to know more and more about God. And the more he knew, and the more his relationship with God deepened, the more his heart also softened for those who were still struggling with darkness, but needed the light of New Life.

Part 4: I Was So lost, and God brought me back.

Benjamin was determined. Experiencing the incredible internal change from just the beginning of freedom in Christ, he knew he wanted more of this. “I was so lost, from so much partying”, he said. “God brought me back.” And as Benjamin could compare the dark years to this new life in The Light, he found a strong desire to serve God with all his heart.

Over time, this became evident in many ways. His daily habits began to change, and his outlook on life changed too. Part of that outlook meant changing the way Benjamin would treat the woman who would eventually become his life partner. 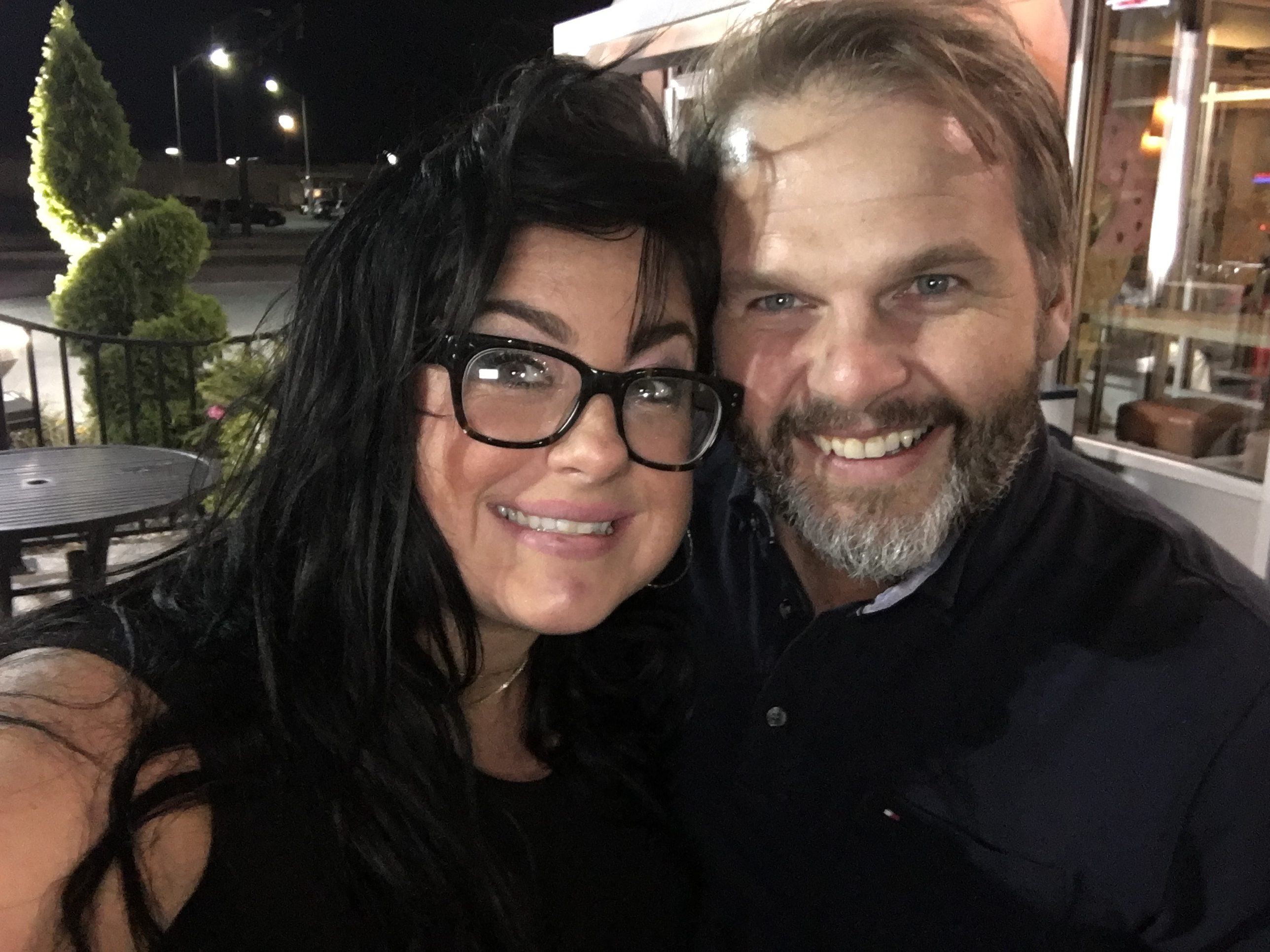 Ben met Missy at church, but this was back in “the early years” before his heart was sold out to serving Jesus. Missy walked alongside Benjamin through good times and bad. They dated off and on for about 6 years, with Missy nursing Benjamin back to health after binges, car wrecks,and more. But Benjamin admits “I treated her badly” and finally it came a point where the relationship appeared to be over. Benjamin and Missy didn’t communicate for 3 entire years.

Communicating with God, however, was a first step in Benjamin re-establishing communication with Missy. “When I was at the end of my rope, “ he said. “I contacted her and said I was sick, and Missy did the most unselfish thing. She told me Jesus loved me and had a plan for me. She shared the gospel! She didn’t bring up how badly I had treated her or how I broke her heart. Missy showed me mercy when I didn’t deserve it!” 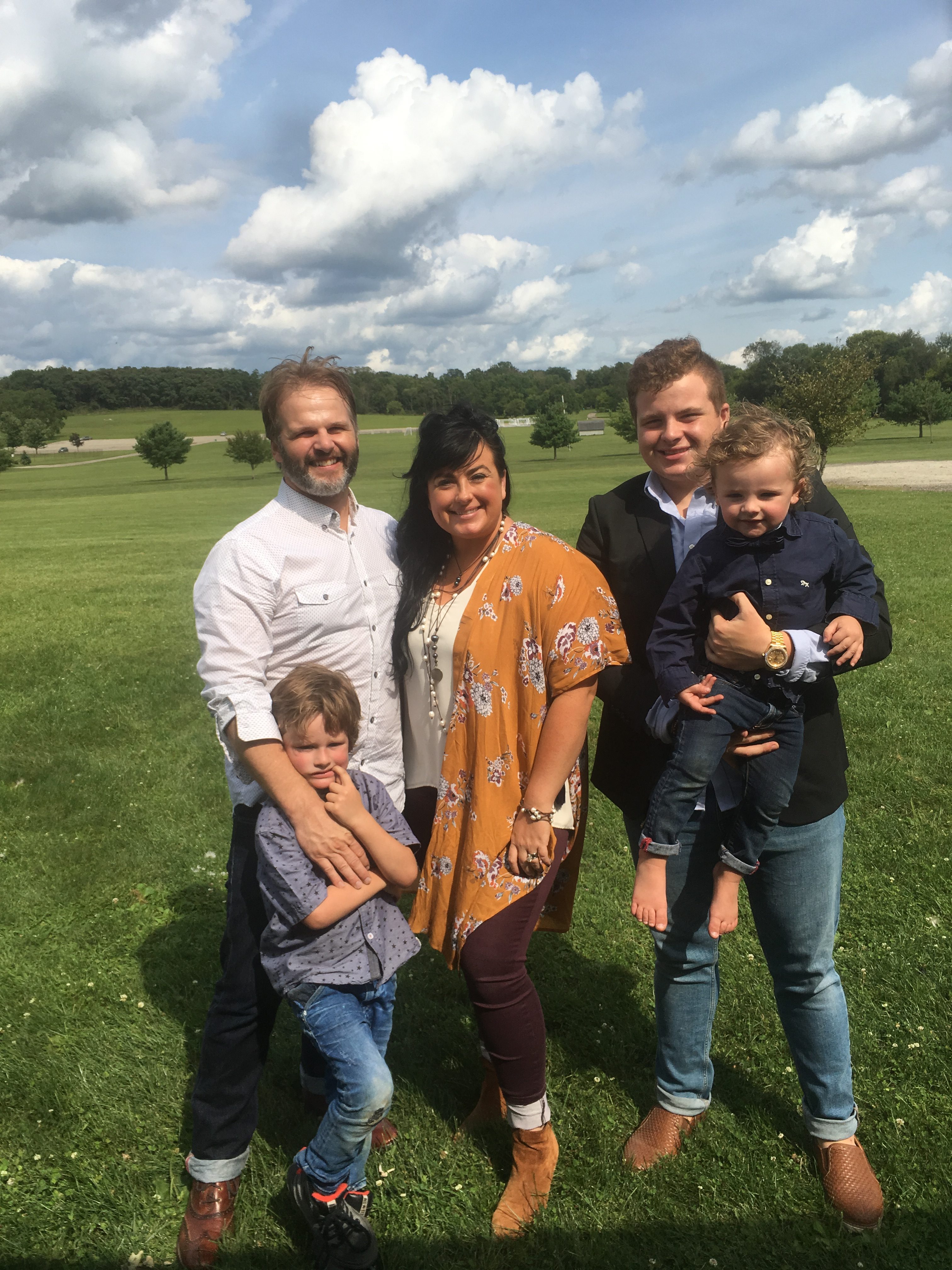 As Benjamin increased his communication with God, the relationship with Missy grew in a new way as well. After a Godly relationship, Missy and Benjamin were married in 2011. Benjamin accepted her son, Calvin, as his own, and within time, two more brothers were born to create a family of 5. “We love to serve as a family. Any opportunity we get, we love to love on people and be the hands and feet of Jesus.”

Family growth also meant spiritual growth, which is part of what led Benjamin to writing the book, War A Good Warfare, Fighting the Battles Within. This easy, yet impacting read starts with the topic of “truth.” Benjamin says its necessary to first be prepared for the truth, to believe in it, seek it, and also go find it. But truth is not the end. As Christians, we do face battles, but as Benjamin said, “If we keep Jesus first, we’re going to win the war.”

Part 5: The Mustard Seed of Faith

As spoken by author, Benjamin Budde: 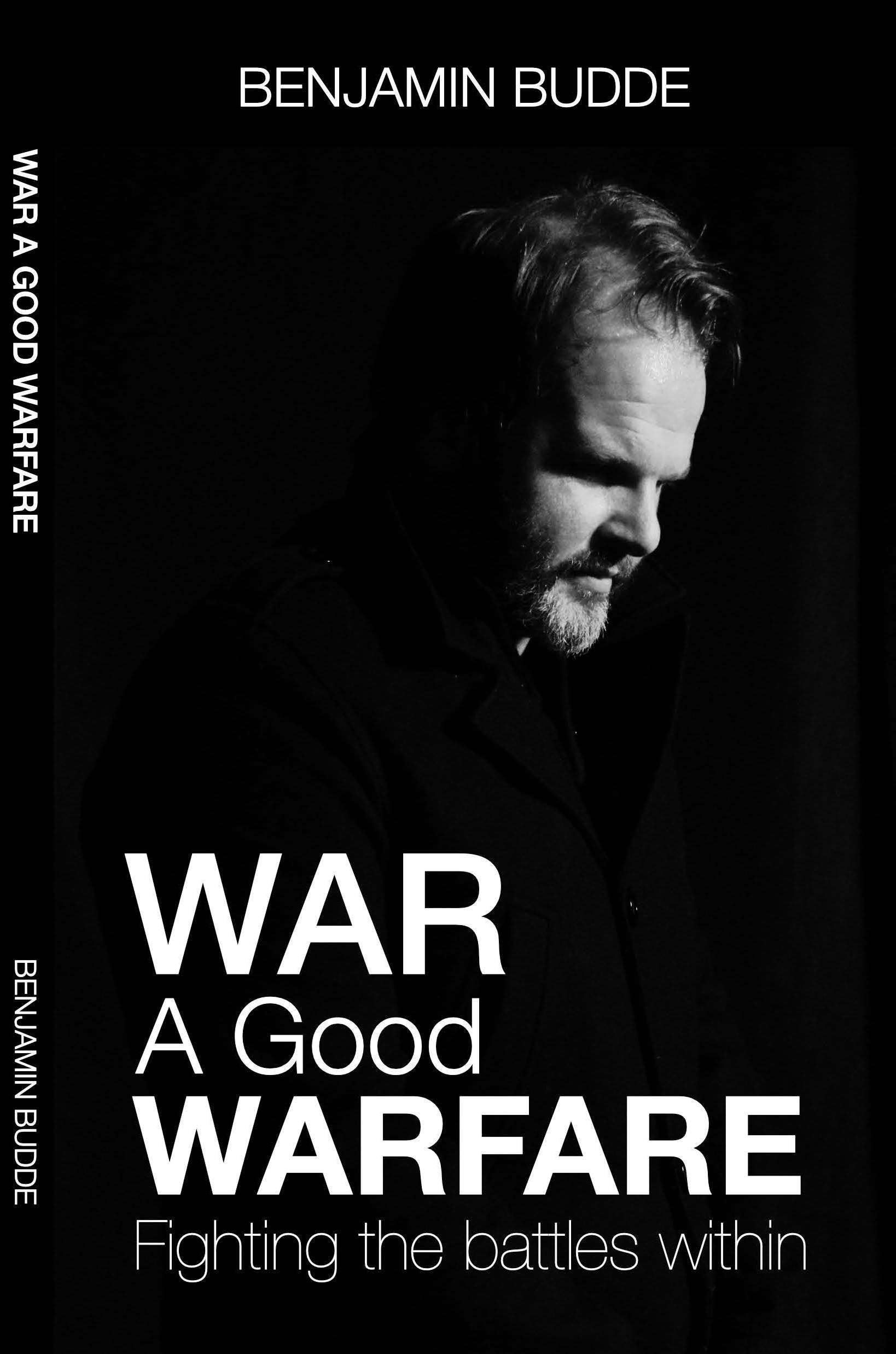 In this book (War a Good Warfare, Fighting the Battles Within), through stories, and what the Word of God says about dressing ourselves to prepare ourselves, we are encouraged to be ready. The Bible says to “take up” and “put on.” If you look into the definition of “take”, you’ll discover it’s kind of a violent word. You’re really fighting to put on the helmet of salvation.

It was amazing to me, when I was writing the book, how the Holy Spirit spoke to me. I had never really thought about what a helmet protects. Looking back, early into my testimony, I experienced influences from what I listened to, and how that changed my concept of life.

When I put on that helmet of salvation, it protects my ears, my mouth, my nose, my eyes, my senses, my brain! It’s amazing, how when we think about what Jesus has done, the forgiveness and loves us, we don’t want to hurt Him. We want to live for Him.

I’ve been doing some book signings in the area, and invite anyone who is able to join us. When I did a book signing in Lima, 2 people dedicated their lives to the LORD….at a book signing! It’s really awesome to see what Jesus will do with your mustard seed of faith!”

10 Best decisions for Single Moms | Ministering in the Workplace

Freedom from a Life Sentence: Exclusive Interview with Nick Slatten

Jennifer Beck - May 20, 2019 0
King Ahab is known for not being a king who honored God. In fact, it was very much the opposite. And the prophet Elijah...
X